CAREERS THAT ARE DYING

August 29, 2018 in Digital for retirement planning, Digital for the workplace, Digital to build your business, Old Dog New Tricks

Here are just a few of the job functions that are likely to get hit by advances in technology in the years ahead. 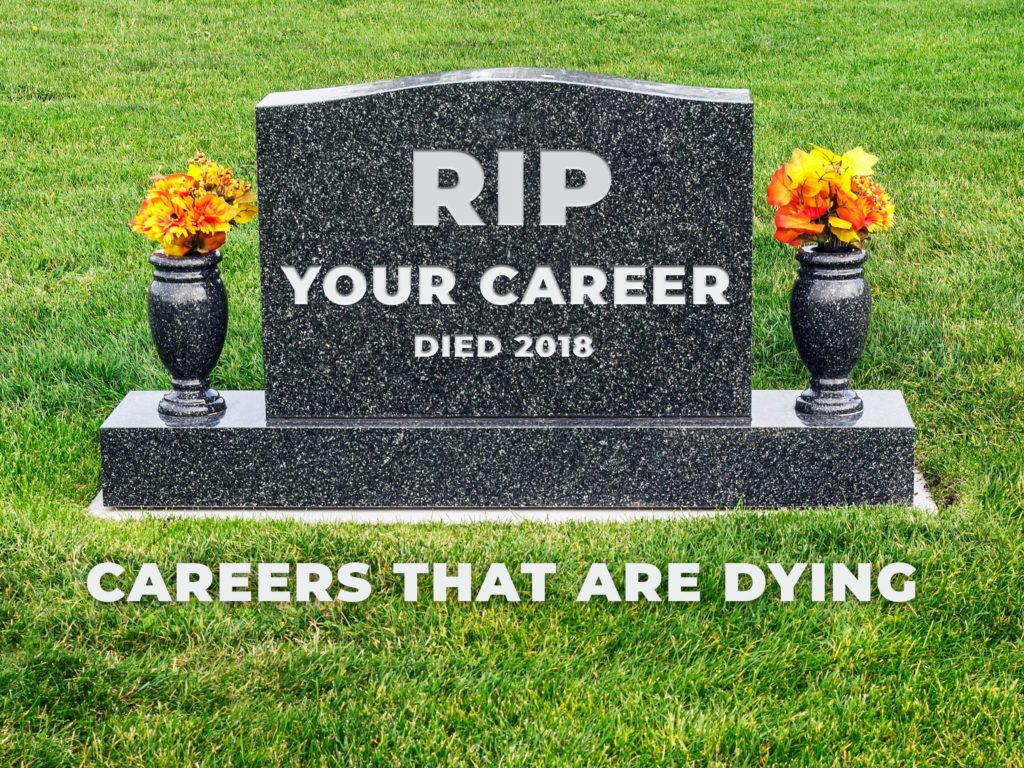 Thanks to online travel booking sites, everyone is their own personal travel agent these days. The Bureau of Labor Statistics (BLS) projects that the number of travel agents will decline by 12 percent over the next ten years. There is, however, an alternative career on the rise. The Occupational Outlook Handbook predicts an increase in the need for people who are experts in specific destinations or particular types of travelers. That could include corporate, luxury, study abroad or travelers over 55.

Quickly being dominated by apps and online comparison sites.

The number of traditional mortgage brokers dropped by 80 percent during the Great Recession, and for those who were able to keep their jobs, average salaries dropped by 30 percent. And the profession hasn’t really recovered, thanks to online brokers like Rocket Mortgage and Guaranteed Rate that make getting an online quote quickAdd in that Millennial’s, the home buyers of the future, have grown up doing everything online, and the outlook for mortgage brokers looks bleak at best.

Blame artificial intelligence for the decline of the bookkeeping profession, says Dmytro Arshynov of DMA Financial Management LLC in New York. Sites like QuickBooks Online and Receipt Bank can automatically download your bank account information and prepare a simple Form 1040 and Schedule form. With the technology constantly improving, Arshynov believes the job of bookkeeping will be eliminated within a decade and replaced with automated technologies.

The world will always have lawyers, but a lot of the work they do — or used to do — is quickly being taken over by technology. A lot of the work once done by case researchers can now be done with increasingly sophisticated algorithms. His recommendation for aspiring legal eagles is to focus on specializing in non-routine human emotion intense areas, like jury selection or witness profiling.

One in 10 of the nation’s 33,202 radio and television announcers are expected to see their jobs disappear by 2026. Consolidation in the industry, as well as increased use of syndicated content, is fueling the decline. There’s also the explosion of streaming music services. More and more listeners prefer that over their local, drive-time disc jockey. Party DJs however, are seeing an uptick in business with demand for their services projected to grow about six percent by 2026. And they earn about the same – $32,000 – as their on-air counterparts.

The paper pushing done by middle managers is increasingly being done by enterprise software like Oracle and Salesforce. People in those jobs should focus on revenue-producing functions like client relationships, sales or new product development

Casino Cashier – and cashiers in general

There are plenty of opportunities in gaming as more and more states legalize gambling, but cashier is not one of them. Casinos are increasingly turning to automated machines to reduce labor costs, meaning the man or woman in the casino cage is going the way of the one-armed-bandit-style slot machines.

The growth in the industry is expected to fuel demand for dealers. But there is a downside: While the number of dealers is expected to grow by 8.7 percent over the next ten years, they earn significantly less than cashiers ($19,552 per year versus $22,970).

Or, as they’re also known, system and server administrators. With so much of computing becoming cloud-based, the IT guy who patrolled your office is becoming less and less relevant in today’s workforce, says Nicholas C. Fiorentino, chief executive at CrediReady. The change is already happening at smaller businesses, which find it cheaper and more efficient to outsource the work. “The good news is, it is creating the opportunity for programmers, freelancers and system administrators willing to pivot to manage their client servers remotely and profitably, and at better scale,” Fiorentino said.

Tasks once performed by low-level retail financial planners are quickly being outsourced to planning software, apps, robo advisors and investing algorithms. But, an opportunity remains for those than can implement market-timing strategies along with asset protection and risk mitigation.

The number of flower arrangers fell 25.6 percent between 2005 and 2015 and is projected to fall another 16.6 percent between 2015 and 2025. Blame the internet and its burgeoning business of flower delivery, as well as a push by supermarkets to bolster their floral departments and sell loose flowers directly to customers. The visual design skills used by floral designers, however, are easily transferable to the higher-paying professions of interior design and merchandise display, both of which are growing.

The Bureau of Labor Statistics predicts the number of postal workers, including mail carriers and clerks, will drop by 28 percent by 2026. Online bill paying and keeping in touch with friends on social media are the biggest culprits in the dreary outlook for workers in the United States Postal Service. Mail sorters will be hardest hit, with a drop of 50 percent in available jobs, according to BLS.

Yes, many online retailers use the postal service to deliver packages, but that demand doesn’t make up fully for other areas of decline.  According to the Occupational Outlook Handbook, “Automated sorting systems, cluster mailboxes and tight budgets will adversely affect employment.”

Last year, the postal service delivered 149 billion pieces of mail, down from 212 billion a decade earlier. And if you think Amazon will save the U.S. Postal service, think again. The company is aggressively building out its own network of delivery drivers in an effort to reduce costs and increase the availability of same-day delivery to better compete with brick-and-mortar retailers.

Digital photography continues to make job hunting tough for people who work with film. There are just 23,853 photo processors remaining in the U.S., according to the Bureau of Labor Statistics, and their ranks are expected to decrease by 19.7 percent by 2026.

Fear not, shutterbugs: The need for photographers is on the increase. That profession is expected to increase by 12 percent to 155,286 jobs by 2026. Portrait and commercial photographers – the people who take photos for businesses and advertising firms – are expected to see the greatest growth over the next decade.

These workers are expected to be the hardest hit in an overall decline in opportunities for the broader category of office and administrative workers. Once again, we can thank – or blame – technology.

Word processing, voicemail and the internet means we end up doing a lot of the tasks that once would have been delegated to an administrative assistant.

The profession had actually been in decline for several years, and then saw a rapid increase in decline during the recession. The economic recovery hasn’t been applied to people in this line of work: BLS projects 13,200 typists to lose their jobs between 2010 and 2020, and 15,900 data entry clerks to lose their jobs in the same time frame.

The number of agricultural workers is expected to decline 8 percent from 2010 levels by 2020, according to the Bureau of Labor Statistics. It’s not because people are eating less, but because farmers are getting more efficient, replacing workers with machinery and getting bigger yields out of smaller plots of land.

The promise of technology is that it will make low-paying jobs obsolete. And nothing is more symbolic of the bottom of the employment food chain than fast food cook, which is one of the few jobs in our list that require less than a high school diploma.

The reason? Fast food is increasingly becoming an automated industry. The chains have found it cheaper to prepare food off site and simply have employees reheat it in their stores.

That was unthinkable in most fast food businesses even a decade ago, but food technology has advanced to the point where the microwaved version doesn’t lack the flavor of the cooked-on-site version.

Given that circulation has been dropping for 17 straight years and Sunday circulation of the nation’s newspapers are at their lowest levels since 1945 — when there were significantly fewer people — and it’s no wonder that the people who fill the paper with news are losing their jobs.

Look for nearly one in 10 reporters to lose their jobs in the next 10 years, according to BLS.

With more and more jewelry being produced overseas, there are fewer and fewer jewelers working in the U.S. BLS projects an 11 percent decline in the number of jewelers by 2024.

Another job that requires minimal education, the low-skilled machine working is increasingly being done overseas. The decline affects setters, operators and tenders of textile knitting and weaving machines.

But workers who have slightly more specialized skills, like skilled manufacturers, are seeing a slight increase in the number of opportunities available to them.

An even better option? Train to be a machinist. The number of people who use lathes, milling machines and grinders to make bolts and other parts are expected to see the number of available jobs grow by 12.9 percent by 2026.

Jim Molinelli is a licensed architect who has taught architecture at Texas A&M University. But he doesn’t see a bright future for people looking to get into the field.

To become a licensed architect requires five or six years of college and another three to five years of internships. “All that to earn far less than the public assumes, and provide a service that is not exclusive or in demand,” Molinelli said.

Molinelli points out that a lot of the services architects provide can be provided by people who do not have licenses.

“In the corporate world, engineers can do the same tasks, and in a residential application, anyone can draw plans for new homes or for remodeling permits as long as they comply with the current codes,” he said. “With the ability to do it yourself, or hire other non-licensed alternatives for work on housing, the public almost never sees a value in spending to hire an architect.”

the primary care physician you go to for your annual physical or when you’re feeling under the weather may be going the way of doctors that make house calls. Routine diagnostics for things like strep throat and ear infections will be replaced with cheap, in-home tests.

“The alternative will be for doctors to spend less time diagnosing illness and more time on addressing human factors that produce better wellness outcomes: counseling for obesity and addiction, performance coaching, or addressing urgent conditions like emergency room doctors or first responders,” he said.

Don’t worry,  artificial intelligence (AI) isn’t about to replace your doctor anytime soon, but it may shift the job market and change the day-to-day work for many physicians. 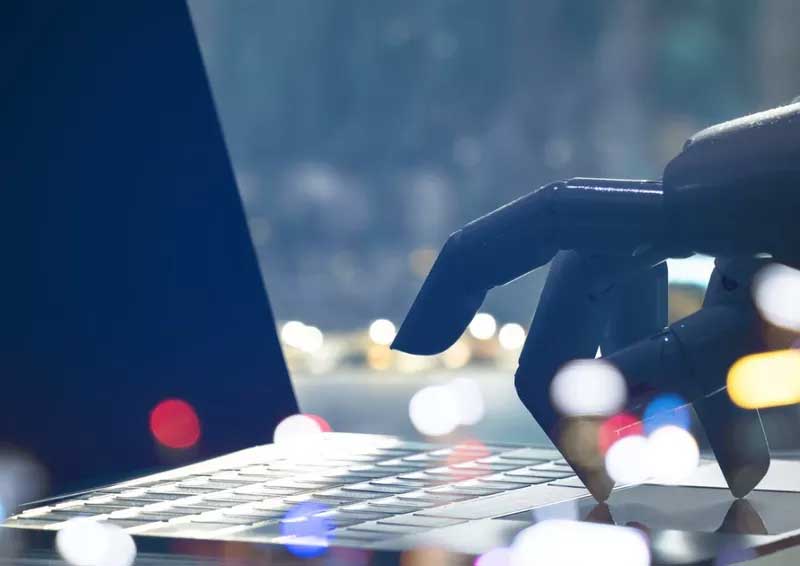 Previous Post Four ways in which marketing automation is evolving 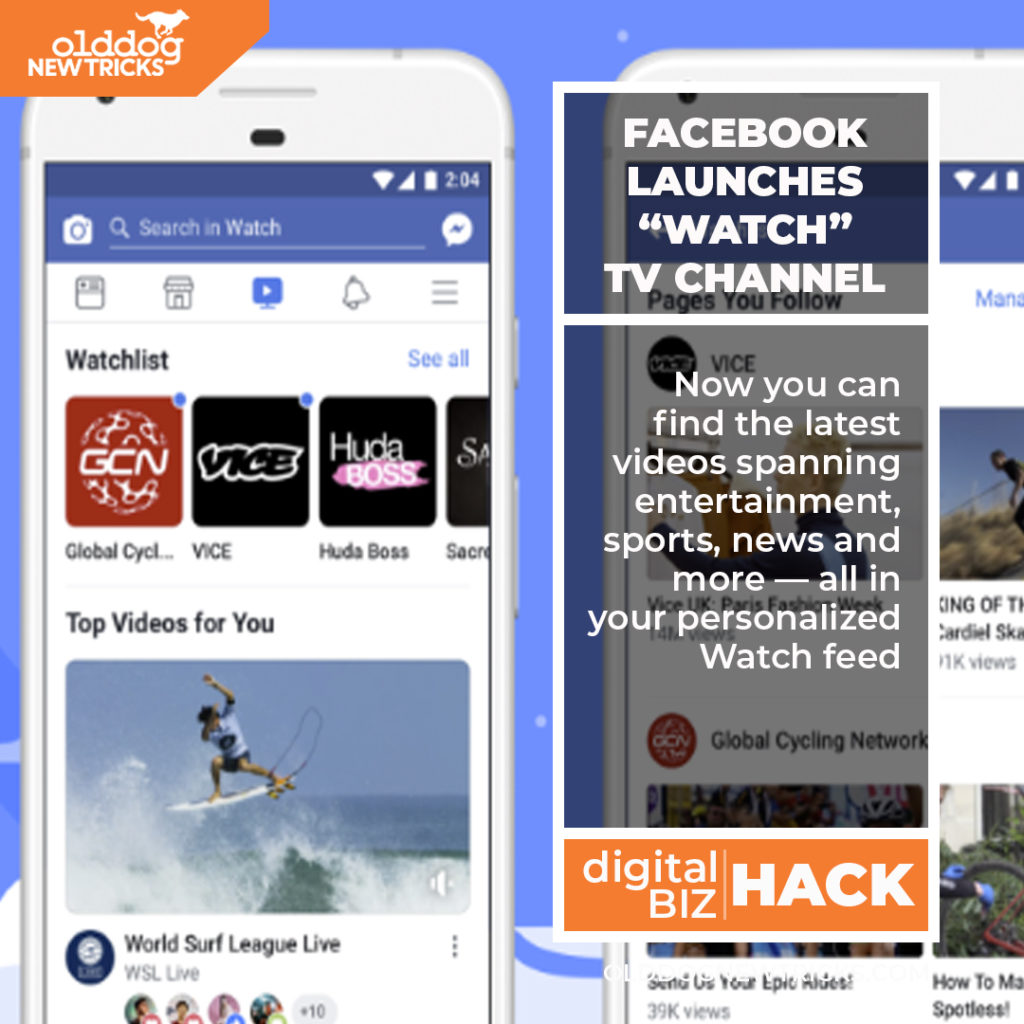 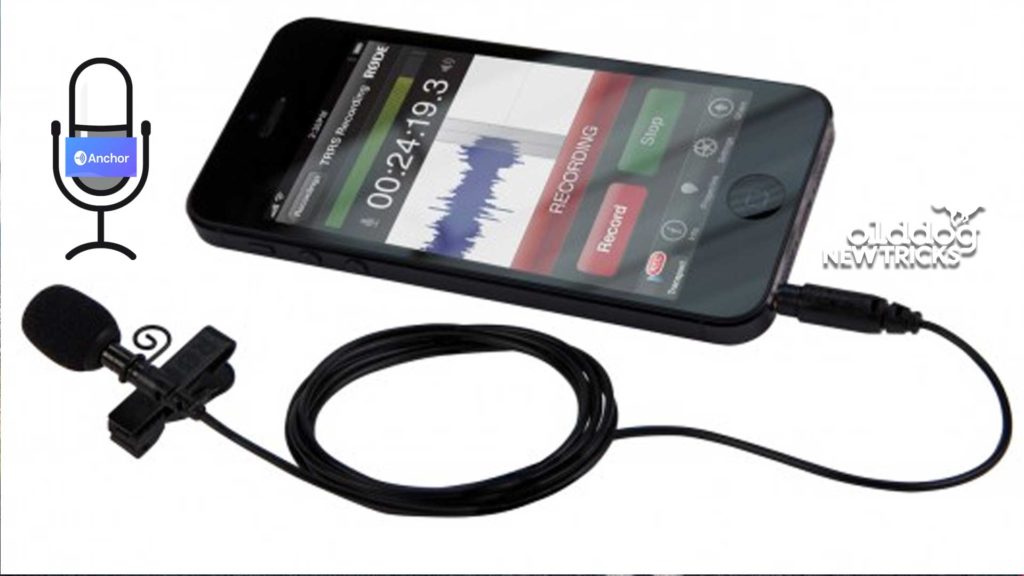 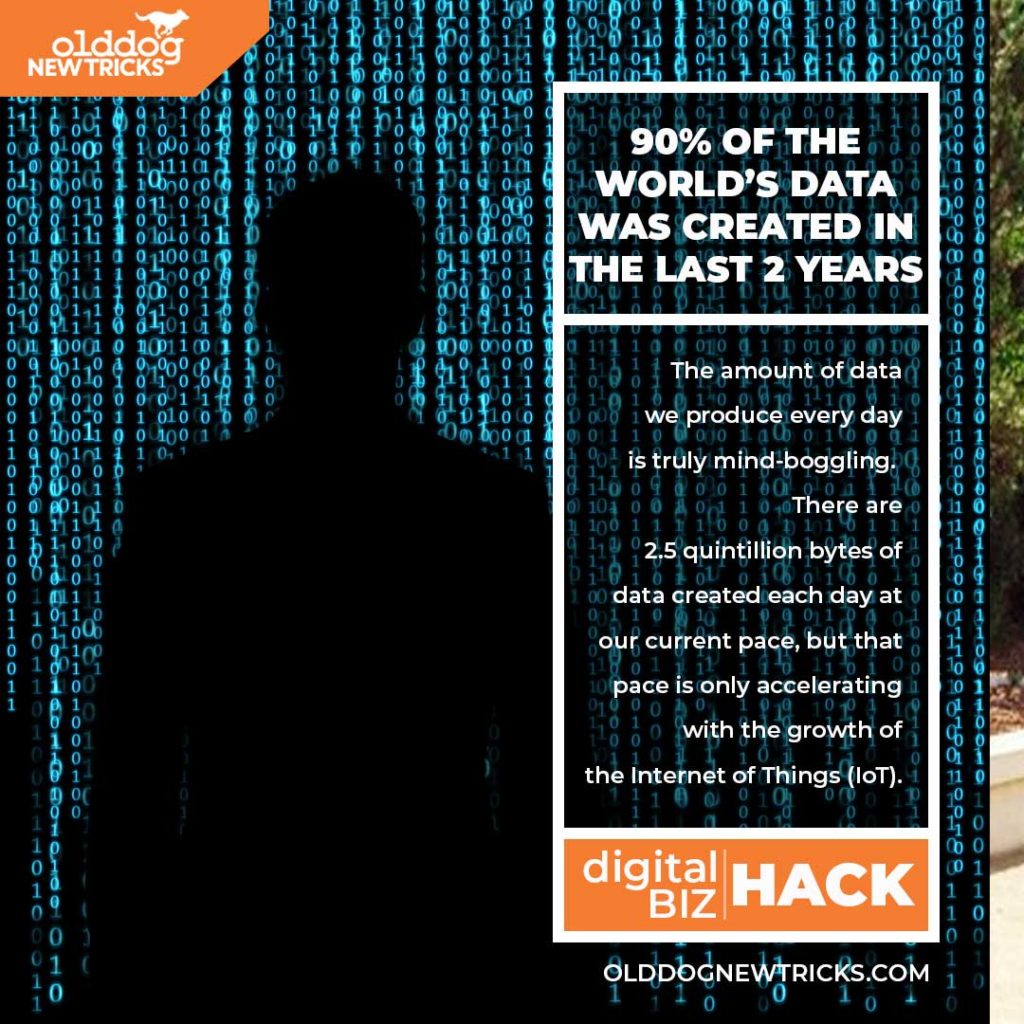